Tickets at the gate $35 - Acoustic Tribute to 50 Years of the Nitty Gritty Dirt Band's music. Emphasis on the Will The Circle Be Unbroken Albums. Now with special guest J Robert 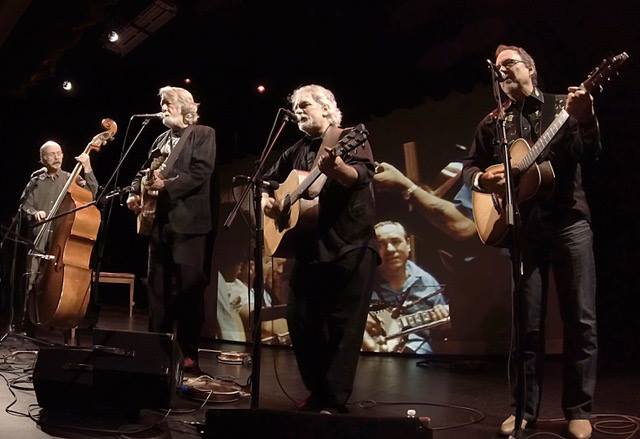 Join two Nitty Gritty Dirt Band founding members (John McEuen and Les Thompson), NGDB touring member (John Cable) and longtime music partner Matt Cartsonis, for a special evening of music and memories of the Dirt Band's multi platinum Will the Circle Be Unbroken albums and 50 years of the NGDB's hits like Mr. Bojangles, American Dream, Keep on the Sunny Side, Will the Circle Be Unbroken, Dance Little Jean, House at Pooh Corner, Earl's Breakdown and more (note: They will not be doing Fishin in the Dark) from their incredible 50 year journey! John's 54 year career and 40 albums have earned him platinum and gold status, Emmy nominations, Grammy Awards, CMA and ACM awards, member American Banjo Museum Hall of Fame, and many other acclaims that can be found on his website: www.johnmceuen.com

At John's instigation, the NGDB recorded Will the Circle Be Unbroken over six days in August 1971, with icons of Bluegrass and Country: Roy Acuff, Doc Watson, Merle Travis, Jimmy Martin, Earl Scruggs, Vassar Clements, and Maybelle Carter. Join John and friends as they share the hits and stories behind this magic time when three generations came together. Will The Circle Be Unbroken has been inducted in the The Library of Congress as one America's most important recordings and is in the Grammy Hall of Fame. The benchmark record is relevant to this day and an Amazon top-20 still! In 1977 John and the Dirt Band were proud to be the first American band to play in Russia.

Gates open at 5:30pm with food available until 6:45pm featuring Red's Kitchen delicious American and locally inspired cuisine. Food is not included in the ticket price. Opening music by Vero's own Bruce Threlkeld.