TICKETS ARE $10 AT THE GATE 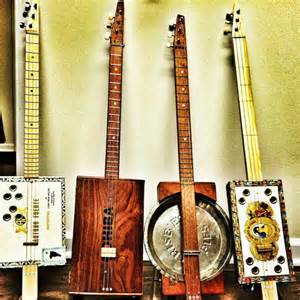 TICKETS ARE $10 AT THE GATE

So what is a Cigar Box Guitar? Simply put Cigar Box instruments are literally made with old cigar boxes, but it goes deeper than that. The first trace of such instruments dates back to 1840-1860, when cigar manufacturers started using smaller boxes to ship about 20-50 cigars instead of the previous larger crates that shipped hundreds. In addition to guitars, cigar boxes were turned into all varieties of stringed instruments including fiddles, mandolins, basses (and their cousin the Diddly Bow), by handy folks who most often could not afford a manufactured instrument. The cigar box guitar was integral in the rise of jug band music and even more importantly - the blues. The great depression saw a resurgence in the home building of these instruments, especially in the rural south, followed by a waning with the introduction of cheaper mass produced instruments.

Cigar Box Festivals have become popular nationwide, with some of the biggest being in the Ozarks, Huntsville Alabama, York Pennsylvania, and Clarkdale Mississippi! Now Summer Crush is proud to be added to that map with the Florida Cigar Box Festival right here on the Treasure Coast. The day's lineup includes the manager of the American Cigar Box Association, Steve Arvey, with his Steve Arvey Band, from Bradenton Florida. Steve is an accomplished blues musician, even having played the Crossroads Stage in Chicago and backing several Blues greats. He is also the director of the Florida Blues Festival in Bradenton. Steve will be leading a free afternoon workshop for those who wish to attend. There will be Cigar Box instrument vendors on hand too, so you can purchase one and get a lesson from one of the greats! www.stevearvey.com

From Nashville Tennessee comes Travis Bowlin. A native mid-westerner, Travis left for Nashville in 2012 and in 2014 released his first studio single, Bad, Bad Man; receiving radio air play on over 50 stations worldwide and performing it on Nashville's NBC News & publications. Just a few months later, Travis had his national TV debut performing his original song Traveling Man on the TLC hit show 19 Kids & Counting. With hundreds of performances under his belt over the last 15 years, Travis Bowlin is looking forward to preforming at Summer Crush for the first time. http://www.travisbowlin.com

Also on stage will be Florida legend Ben Prestage. Ben, who was taught the blues by his grandfather, a Mississippi sharecropper, grew up in rural Florida and picked up the appreciation for the banjo from a wine making and bluegrass playing neighbor. Ben moved to Memphis as a busker (street performer) with these skills in his bag. Influenced by other buskers, Ben soon added drums and the diddley-bow to get the attention of the tippers. Ben's unique style and seemingly impossible talent has earned him three consecutive years of top 4 finishes in the International Blues Challenge, as well as, being the only two time champion of the Lyon/Pitchford Award for "Best Diddley-Bow Player," and being, "The Most Unique Performer" at "The Song- writers' Showcase of America!" www.benprestagemusic.com

As with all our events: No off premise coolers, food , or beverages of any kind, including water is allowed. We will have everything you need, including free ice and water. Also, a No Tailgating policy is strictly enforced.

There are several other fun things to do besides listening to great music all day, like a wine tastings in the winery tasting room and browsing the unique gift shop, and games like; 9 hole disc golf course through the vineyard, giant lawn checkers, giant 4 in a row, lawn shuffleboard, giant jenga, several corn hole games, hula hoops and more.

The event is rain or shine in our large covered pavilion with roll down vinyl sides. If there is a dangerous thunderstorm the show may be delayed and resumed when the weather passes, but not cancelled.

For those who will be coming from out of town, our Host Hotel is the Holiday Inn Express West in Fort Pierce, conveniently located between I-95 and Florida Turnpike exits in Ft Pierce at 7151 Okeechobee Rd, Fort Pierce, FL 34945. It is only 8 minutes from the winery and as our Host Hotel partner they will be offering significant discounts to customers who mention Summer Crush Winery when making their reservations. For blocks of rooms of 10 or more made at one time, be sure to ask about possible deeper discounts. Reservations can be made by calling 772 464 5000.

If you have a fully contained RV, you can stay with us right here on the winery property by joining Harvest Hosts (www.harvesthosts.com), a great program that allows you to stay at wineries and farms all over the country. We will have limited spaces so call to reserve yours early.

For great food, Creative Chef will be serving their delicious favorites. Food is not included in the ticket price. Summer Crush will have their popular beverages;

as well as over 30 local microbrew and select beers and ciders.

Recently, however, there has been a revival of interest in Cigar Box instruments, called the Great Guitar Box Revolution. It has resulted in a growing number of talent musicians, especial those wanting to play the Delta Blues in its purest form,